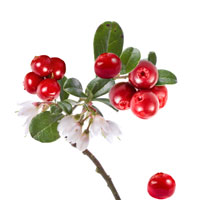 The American Cranberry (Vaccinium macrocarpon) is one of only three berries native to North America; the other two being the Concord grape and the blueberry. Every school child in America has been told the Thanksgiving story of the Pilgrims and the Native Americans in Plymouth, Massachusetts, which just happens to be in the heart of cranberry country. This story always involves Native Americans, Pilgrims, turkey, corn and, of course, cranberry sauce. While historians continue to debate the accuracy of the traditional Thanksgiving story, one thing is for certain and that is that cranberries were on the menu!

It’s true that the Native Americans did introduce the white man to this indigenous berry and it was admired in the Native American culture for its myriad of uses. Every time you see a granola or energy bar, you can be thankful that the Native Americans came up with this idea. Yes, it’s true. They made cakes called Pemmican by using fat (usually bear fat), cranberries, nuts and grains. They took these dried, pressed cakes with them on hunting and fishing trips as a good source of nutrition and energy that was easy to carry.

The Native Americans referred to the cranberry as sassamanesh and ibimi. The Native Americans, in addition to using cranberries as food also used it for medicinal reasons; many of which modern science and its “evidence-based medicine” approach have now proven to be true. It was valued as a remedy for blood poisoning and poultices of crushed cranberries were used on wounds that were infected. It was also used in conditions where fever was present. A tea would be made from the cranberries and/or their leaves and drank by the febrile patient. The cranberry not only offered medicinal benefits but it was used as a dye and to barter with the early settlers. The Delaware Indians considered the cranberry to be a sign of peace. The chief of the Delaware Indians was called Pakimintzen which translates into “cranberry eater”.

There are many theories as to how the cranberry got its common name. One is that the flower of the cranberry plant resembles the head of a crane and, in some older recipe books and history books on this subject, they are called “crane-berries”. The European settlers called them marsh-whorts, fen-whorts, marsh-berries and moss-berries. A fen is another word for a boggy wetland, similar to a marsh and whort is an Old English term used to describe plants or herbs that grow prolifically and spread rapidly.

The first recorded exportation of cranberries to the European market occurred in 1550. Sailors would keep cranberries on board ships and eat them to ward off scurvy. They were allotted a handful a day. It’s interesting to note that no one knew about Vitamin C at this point in time, however they did know that if they ate certain fruits that they would not suffer from scurvy, which is caused by a lack of vitamin C.

The first record of cranberry cultivation was in 1816. It happened one day that Captain Henry Hull of Dennis, Massachusetts noticed that sand blowing over his bogs and settling on the cranberry vines improved their production. Other growers followed Captain Hull’s lead and soon began sanding their bogs which resulted in greater harvest yields. This practice is still in use today. The sandy, acidic soil found on Cape Cod is the perfect home for these plants.

The industry grew rapidly and exportation increased throughout the 1800’s. In 1888 the Cape Cod Cranberry Growers’ Association was formed and is still in existence today. In fact, it is one of the oldest organizations dedicated to farmers in the United States. Its’ goal, according to their current website, is to “Enhance the economic viability of the Massachusetts cranberry grower.” Its’ mission is, and always has been, to support and promote the cranberry growers of Massachusetts.

Cranberries are graded and separated by a method called “bouncing”. The method is exactly as it sounds. A good berry is said to bounce seven times. The method of bouncing berries to separate the good from the bad is first credited to a New Jersey cranberry grower known as Peg-Leg John. As the story goes, Peg-Leg John stored his berries in the loft of his barn. Having the wooden leg prevented John from being able to carry the berries to the ground floor of the barn so he would pour them down the ladder to the loft. He noticed that the good berries always made it to the bottom but the poorer quality berries usually were left on the ladders step. Peg-Leg-John’s discovery eventually led to the invention of the Bailey Separator in 1923.

In World War II over one million pounds of dehydrated cranberries were supplied to the troops each year. The demand for cranberries increased and in 1953 the first million barrel national crop was harvested. Cranberries are sold by the barrel. A barrel of cranberries weighs approximately 100 pounds and there are about 450 cranberries in a pound so each barrel contains 45,000 berries. (An interesting note: it takes approximately 4,400 cranberries to produce one gallon of pure cranberry juice.)

In the 1980’s cranberries really went international and the demand for them increased as diversified cranberry products began to show up on grocery store shelves. Cranberries were added to cereals, cranberry juice blends appeared and the cosmetic industry began to increase their demand for the use of the seeds, mainly in the European marketplace but soon to follow in the American cosmetic industry.

Today, more than ever, cranberries can be seen in many different places in the supermarkets of America. The canned food aisle where they have always been in sauces and jellies and the juice aisle with many different blends available in addition to the traditional cranberry only juice. If you look at the salad dressings and marinades, many will have cranberries as a main ingredient. Cranberries are found in cereals and in granola bars, breads and muffins. They are offered in the form of sweetened and dried, or whole berries fresh or frozen almost all year long. They are an ingredient in many cosmetics for their wonderful antioxidant properties and high vitamin C content. In the health and beauty section they are found in teas for supporting the immune system and for preventing urinary tract infections. Pills and capsules of cranberry extract also are sold for those who don’t like the taste of cranberries. (They probably aren’t reading this book!)

As more and more scientific research clearly defines the medicinal properties of these rubies in the sand the demand for them will certainly continue to increase. They are sustainable and affordable; two things important in the economic times that this book is being written in. Using them as a staple in our diet just makes sense if one wants the most nutrition for the least cost. “More bang for your buck” or “berry” in this case.