Definition of a Bog 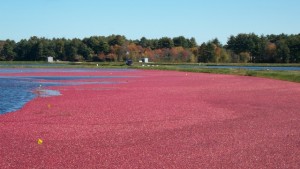 A bog forms in a water filled depression in which plants that survive in the nutrient poor soil, such as sphagnum moss, spread from the water’s edge to form a mat of vegetation growing toward the center. The mat creates an anaerobic environment that slows plant decomposition. Over time, dead moss and other plants accumulate to form a layer of peat. Plants growing in bogs survive in a highly acidic substrate and include Eastern Larch, Black Spruce, Mountain Holly, High Bush Blueberry, Speckled Alder, Pitcher Plant, Sun Dew, Bog Rosemary, Showy Lady Slipper, Trillium and, of course, The Cranberry!

In the wild cranberry plants grow in damp bogs and swampy areas. It is a self pollinating ground cover that grows two different ways. Runne 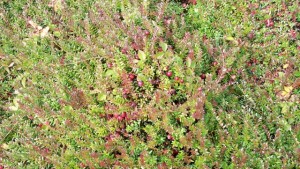 rs can cause the plant to spread out as much as two feet per growing season. Upright canes grow up from the runners and produce the flowers and fruit. Cranberries are established vegetatively from stem cuttings. In the spring, established cranberry vines are mown and collected into bales for transport to the new cranberry bog. The cuttings are spread on the ground and worked into the soil by dull discs. By the end of the summer the vines have produced roots and are on their way to becoming established. Usually within three years, the first new crop is ready for harvest. Cranberries grow in tight clusters, and are either dry picked or wet harvested. Dry picking is most common when the fruit will remain fresh, while wet-harvested cranberries are usually used for juice, sweetened dried cranberries, or when added to other products. 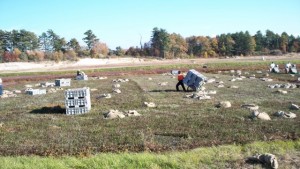 Dry harvesting, the “new” old way. Cranberries were once scooped by laborers with wooden scoops while crawling on their hands and knees. The cranberries were collected in wooden boxes then brought to a screening house for sorting. Times changed and mechanical harvesters were invented, but the labor is still very intensive. These dry pickers are called Furfords. They are chain driven and guided by experienced workers. They follow the contour of the bog, and the berries are separated from the vine, rising up a conveyor belt and dropped into burlap bags which will be brought to collection points for screening.

Burlap bags filled with dry-harvested cranberries are at collection points for screening. The plastic bins are roughly 4 feet square in dimension with a removable steel grate placed on top. The cranberries are dumped from the bags onto the steel frame and then hand agitated over the openings, allowing only the cranberries and small leaves to fall through while surplus vines and debris are cast aside. The debris is removed from the vine so as not becoming next year’s problem.

After the berries have been sorted from the dry harvest, the bins are placed three high with lifting straps under them. A helicopter is used to bring the full bins to a waiting flat-bed trailer truck to continue on their journey from our bogs to you. Enjoy fresh fruit as often as you can. 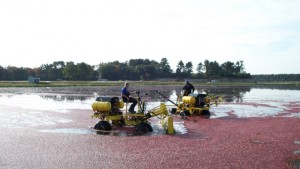 The cranberry bogs are flooded with 6 to 8 inches of water so the Water Pick Tractors can drive through and separate the berries from the vine. These tractors have agitating, spinning rollers on the front that graze the vines, causing the cranberries to be released. Cranberries float because the interior seed cavity has a hollow area. The bogs are then flooded to a depth of approximately two feet so they can be corralled by a floating boom. The cranberry has now grown to its ripest, fullest state and is ready for its journey to you.

The colors of each cranberry are so different depending where on the vine they were growing. Those that received the greatest amount of sunlight became the ripest red, while the whiter berry grew lower and was shaded from direct light. All mixed together, what a wonderful drink theyÂ’ll be. A newer variety of berry, Stevens, is larger and deeper in color. These premium berries are used for Sweetened Dry Cranberry (SDC), and in everything from cereals to trail mixesÂ—handfuls of goodness just waiting for you. 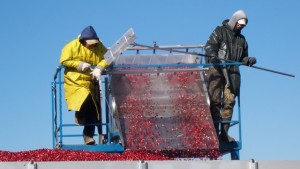 Water is essential in growing cranberries, but they are not grown in water. In 1816, a storm flooded a Cape Cod cranberry bog, and the sand and water which washed in caused the berries to grow much better and faster. Cranberries have been farmed this way ever since. During the winter and early spring, bogs are often flooded to protect the plants from freezing. As the cranberries mature over the summer months irrigation from spraying brings needed water for plant growth and cool water keeps the vines from drying in the heat. Then in autumn, the bogs are flooded again, ripe cranberries float to the surface and are corralled and harvested by workers.

The use of floating booms allow the cranberries to be brought into a tightening circle so they can be removed from the bog. The smaller inner circle is where a suction pump will be installed. 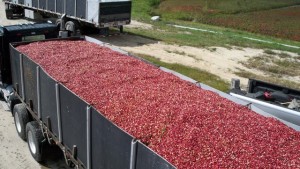 The cranberries, having been sent through the suction pump, travel through a separator to remove most of the vine and debris. The cranberries get a fresh wash to remove as much remaining leaf as possible. They then drop into a trailer which holds between 450-500 barrels of cranberries. Each barrel weighs 100 pounds. At this state the cranberries are delivered to a processor where they are converted into the final product.